The Best Type of Guitar for Beginner Guitarists 

Acoustic? … Electric? … Classical? “What type of guitar should I buy?” is a common question when somebody decides they want to play guitar.

“What type of guitar should I buy?” is a common question when somebody decides they want to play guitar.

My goal is that, by the end of this article, you’ll be able to confidently identify which guitar type is best for you.

When I started playing guitar, a common piece of “advice” was that you should start on acoustic guitar to learn the fundamentals, and then switch to electric once you’ve passed the beginner stage.

I heard some people say it’s easier to start on acoustic to build up finger strength, and then move to electric, but starting on electric guitar and then playing acoustic guitar was a lot harder.

I’ve even had some people tell me the complete opposite – that starting on electric is easier, because the strings are easier to push down, and then moving to acoustic after would be better once I developed finger strength.

Another viewpoint is that I should start on classical guitar to develop good technique, and then switch to acoustic or electric.

(That opinion came from a classical guitar teacher… Obviously, he was a little bit biased)!

In my experience as a guitar teacher – and performer of acoustic, electric, and bass guitars – I have found all the “advice” previously mentioned to be completely false.

So, what is the best type of guitar for a beginning guitar player?

The best type of guitar for a beginning guitar player is the one that best matches your long-term guitar playing goals.

In my experience, I’ve found my most successful students were the ones who, from the beginning of their guitar playing, were working towards achieving their long-term goals.

This, of course, is dependent on you having long term goals.

But that’s actually a good thing–you want to have, need to have, and should have long-term goals for your guitar playing!

The problem with the previously mentioned “advice” (opinions) is that they don’t take into account the player’s long-term musical goals.

What if you’re a bluegrass fanatic who wants to jam with other bluegrass players? Why would you start with an electric guitar when, dollars to donuts, you’re only going to want to play acoustic guitar?

It doesn’t make any sense to start on an instrument that you’re not interested in, only to switch down the road.

It’s like a race car driver starting to race by being a sprinter first. It just doesn’t make sense.

Let’s take a look at a couple more examples:

Sally is a die-hard folk music fan. Her favourite guitar player and musician is James Taylor. She loves the sound of his guitar. Sally wants to learn to play some James Taylor songs and would love to be able to write her own songs and accompany herself on her instrument while she sings.

What type of guitar do you think Sally should choose?

Jordon is a rock n’ roll kind of guy. He listens to bands like AC/DC, RUSH, Led Zeppelin, Eric Clapton, and alt-rock bands that are popular among his circle of friends. He feels an overwhelming emotional rush every time he hears a good guitar solo and would love to be able to play high-energy leads like Angus Young.

What type of guitar do you think Jordon should choose?

Now, here’s one caveat: I say “probably” in both examples since, really, the only person who knows what type of guitar to choose is the player themselves.

On top of that, when it comes to guitar, you are only limited by your own beliefs.

There are really no rules… just common practices.

At the end of the day, it’s YOUR decision to make.

What kind of guitar do you want to play?

You may already have the answer by now… But if you’re still stuck, here’s a quick exercise to help you get started:

Close your eyes and imagine you can play guitar how you’ve always wanted:

THAT is the type of guitar you should start playing.

In case you’re wondering, that was me in Example #2. I always imagined myself playing electric guitar. And that’s what I started with.

Here’s the proof: I’ve not only achieved, but far surpassed my original long-term goals… More than I ever thought possible when I started.

I hope you do the same! You can do this.

Jordon Brosseau is a professional Canadian musician and guitar teacher. He is an avid reader and vinyl enthusiast. If you are looking for guitar lessons in London, Ontario, be sure to give him a call!

Get updates and learn from the best

The Best Type of Guitar for Beginner Guitarists 

Acoustic? … Electric? … Classical? “What type of guitar should I buy?” is a common question when somebody decides they want to play guitar. My

drop us a line and keep in touch 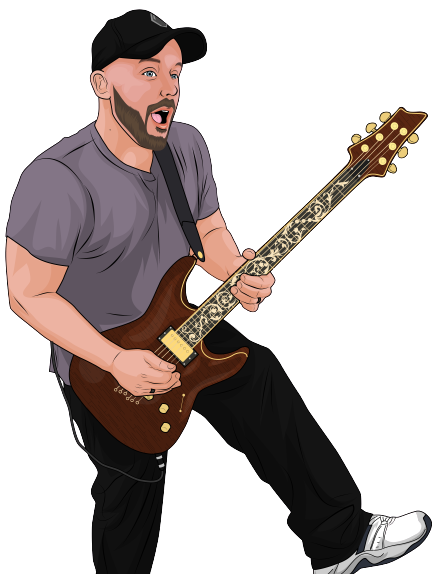